So, having seen the Eurythmics live, I have always been very much of the opinion that Annie Lennox’ voice is much better than has ever been captured on a recording.

This will be an interesting revisit as I haven’t played this one for many years!

Time to break out the vinyl again as this one is LP only here! 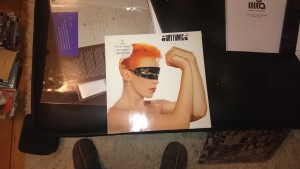 Quite a transition to listen to this after Wilco, needs a slight recalibration!

‘Here Comes the Rain Again’ wasn’t really one of my Eurythmics favourites despite its success, but it is good to hear it again and just to pick up on the Eurythmics sound and recalibrate back to ’83 – yes it is 32 years old this year. I actually prefer it now and I really like the opening with the strings and the vocals sound great as well, not too overdone.

I think ‘Regrets’ is a great song with really good, soulful beat and fat synth bass line. I used to think I actually preferred it to ‘Here comes the Rain’ as I really liked the sound of Annie Lennox’ voice in it, but now I’m not so sure – great track though.

‘Right By Your Side’ from the ‘Steel Drums’ sound to the 80’s sax sound is a pretty good pop song as well, but there are others on this side (and the rest of the album t.b.h.) that are a bit ‘fillerish’.

‘Cool Blue’ starts really well again with that heavy synth bass line to die for,  but doesn’t really develop into the  tune which appears to be trying to get out, and ends up a bit throw away, not sure why.

Then there is ‘Who’s that Girl’…

From the opening with the reverb on the voice, it was memorable at the time and still stands up. ‘But there’s just one thing..,  just one thing…’, followed by that ominous bass and background wailing (for want of a more appropriate word – sorry Annie).

It is haunting and slightly menacing at the same time. This is the song of the album for me and a great slice of 80’s music. Each time I have listened to it I have enjoyed it more, and have been reacquainted with an old friend who I had forgotten about over the last few years.

I just don’t think the second side is anywhere near as good and to reverse Jerry Lee (and more recently Sum 41) –  ‘mostly filler not too much killer’.

‘The First Cut’ sounds a bit like a not as good version of ‘Situation’ by Yazoo  (having said that there is a fair bit of 80s stuff that this could also be said about).

‘Aqua’ once again starts well but doesn’t really go anywhere from promising beginnings, its not bad just doesn’t do anything.

‘No Fear, No Hate, No Pain (No Broken Hearts)’ has elements of a nowhere near as good tribute to ‘Who’s that Girl’ and I don’t really like the way the vocals fit with the melody either. The vocals have also been arranged so that that ‘hard’ backing vocal sound  is overdone at times which I also struggle with. This is my least favourite on the album.

‘Paint a Rumour’ is also pretty forgettable. So, as mentioned before, not a particularly memorable second side.

I like the Eurythmics, but am not sure why this is in the top 500 and (for example), Yazoo – ‘Upstairs at Eric’s’ isn’t.